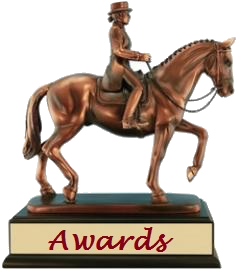 Register by mail or online for the year-end awards. Awards are presented at the Annual Banquet.

NEWDA offers an awards program for it's Members to recognize outstanding performance in dressage competition by horses ridden and owned by NEWDA members. The programs were created to encourage NEWDA members to take part in the learning experience of dressage competition and to augment and parallel the awards programs of the United States Dressage Federation (USDF), while making allowances for local conditions.

NEWDA is a non-profit, tax-exempt corporation under US Code, section 501(c)(3) incorporated in the state of Wisconsin.